In parallel to the close scientific cooperations with the partner institutions of the two SFBs at IFM-GEOMAR, links with schools in the respective countries are being established to emphasise the importance of international collaboration in geosciences.

In Cape Verde, INDP (Instituto Nacional de Desenvolvimento das Pescas) has started to invite local schools in Mindelo to join first common projects. These concentrate on the distribution and abundance of marine species and the concentrations of nutrients and pollutants in the waters around the island of São Vicente. Similar measurements are carried out in Kiel Fjord by pupils from Heinrich-Heine Schule in Heikendorf, with the goal of comparing the "Sea in Front of Our Door" at the two locations side-by-side on a common internet site. To get this project started, a small delegation of pupils and a teacher from Heikendorf visited Escola Salesiana in Mindelo in February 2011. Supported by staff from INDP, the University of Cape Verde and IFM-GEOMAR, excursions by German and Cape Verdian pupils were undertaken to practice the sampling techniques at different locations on São Vicente and in the laboratory. Measurements are now to be continued on a regular basis both in Mindelo and in Kiel. 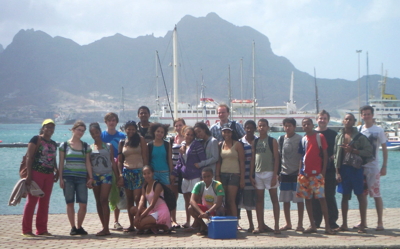 Participants of the excursion on São Vicente in February 2011

These activities were preceded by a visit in November 2009 where options for cooperations were discussed by representatives of schools and scientific institutions, and by a cruise on R.V. MERIAN in May 2008, where for the first time German and Cape Verdian pupils were able to participate in a research expedition to the equatorial Atlantic.

... continue to: "Project Partners and Supporters" ...